I began writing a post today about life and book updates, and quickly realized I needed two posts instead of one long, monster sized one. Life has been a little busy for me lately. We’ve had gorgeous spring-like weather through February and March so I’ve been outside as much as possible hiking, mountain biking, running, and enjoying the sunshine and flowers. It seems to be coming to an end right now as we’re headed into spring break. 😦 I guess I shouldn’t complain about a week of sleeping in, though!

We also have baby bunnies at my house. That happened by accident, actually. A strong wind knocked a giant oak over six weeks ago, which landed on our bunny hutch and crushed it. The bunnies made it out just fine… So fine in fact that they weren’t too shaken up to procreate. Now we have two new moms and seven babies that are twelve days old. Here’s a few pics of my precious little babies: 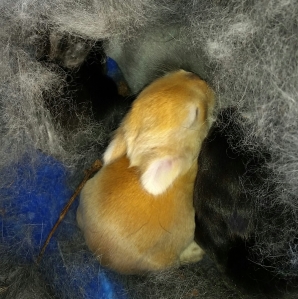 My little gray and white otter mom had two babies, one just like her and another that’s a black otter: black on top and white on bottom – that’s the one in a pic by itself. This one looks just like his dad so I’m calling him Mr. Fluffy Jr for now. (And I’m assuming he’s a boy just because…)

My little black bunny had five babies. Three are all black like her, one is all gray, and one is gold. Everyone is in love with the little gold baby! My kids are coming up with fun and crazy names for the babies. It’s almost a game because we’ve come up with so many possible names for each baby.

We’ve also been mushroom hunting out in the mountains for yellow foot and a fun mushroom called hedgehogs, which have soft spikes on the underside. They grow together and make a super delicious soup with a delicate flavor. I might actually like their soup better than chanterelle. Here’s a mushroom we found that’s not edible, but it was pretty so I wanted a pic:

I swear I see a dozen or more types of mushrooms each time I’m in the woods. A few are edible, but there’s some crazy looking or pretty ones too, and I like taking pictures of those. This one is a prettiest pale, peachy yellow. Too bad it didn’t show up in the pic better.

And I’m off to write my post about writing…