More Than a Promise: Cassie’s story is available!  It’s the sequel to Embers of Hope, so here’s the blurbs for both books:

Savanna Thompson knows what it’s like when you blink and your life shatters. She’s been hiding her divorce from her best friend Cassie, but she knows she can’t any longer. Cassie’s husband, a firefighter, just died. Savanna rushes home, along with her one-year-old daughter to help, and now she’s staying with Cassie in a nursery meant for a baby that won’t ever exist. Cassie lost that dream along with her husband.

Savanna wants to fix their relationship after hiding so much, but it’s complicated with Jason around. He’s the firefighter who saved Savanna’s life two and a half years ago. He just lost his best friend, and like Cassie, he blames himself for Mike’s death. When he convinced Mike to remain with the department, how could he know Mike would die fighting a house fire?

Though hurting herself, something deep inside her won’t let her walk away. Jason needs her but she’s off limits on so many levels. She’s falling for this sexy firefighter but he confuses her to no end. Being stuck in the middle is enough stress, plus her own problems are festering behind her helping smile. Can Savanna find the balance between loving Jason, helping Cassie, and taking care of herself and her daughter? Or is she going to lose this bet and her best friend?

Cassie escapes to Ocean View Stables on the Oregon Coast to cope with the three year anniversary of her husband’s death. She’s starting to dream about her future again and possibly romance. A safe romance, that is, where people don’t die. Maybe her trusty next door neighbor Brandon would be a safe bet. But once at Ocean View, she runs into Ethan Caldwell, the cute boy who teased her through grade school. He sure grew up – into a man who’d catch anyone’s eyes. The romantic man has a song for every emotion. He’s a single dad to nine year old Isabel, who talks about her parents getting back together…as soon as her mom is out of rehab. Then maybe her mom can watch her while her dad goes on his work trips. Apparently Ethan has some kind of dangerous, secretive government job. This isn’t at all what Cassie is looking for! So why is she running full speed into another broken heart?

“Want to go swimming?” he asked.

She was busy thinking and thought she misunderstood him, but the expectant smile on his face told her otherwise. “Right now?”

He got up and stuck out a hand. Before she could think the situation over, or create a good reason to say no, he had grabbed her hand and was pulling her toward the river, looking back once to grin mischievously. “We’re being sneaky!”

He let go of her hand to pull off his shirt. The moonlight silhouetted his body as he walked closer to the water, his shorts dropping. Either he hadn’t been wearing underwear or he dropped them with his shorts. It was nothing but skin. She looked away, pretending she didn’t just see his naked body…his very toned, naked body.

“I can show you the world…” he sang as he walked toward the water. “Take you wonder by wonder…”

Was that from the movie Aladdin? She giggled. She couldn’t help it; she giggled like a little school girl.

“Over, sideways and under…”

Could he possibly be thinking the same things she was? This man was not like those other guys, the ones who wanted to sit in a restaurant and ask her about life plans.

“I won’t look,” he said, wading in, with a hint of repressed laughter.

And my other November Release is…

A Spy for Christmas — a novella 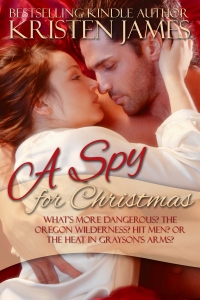 Robin is returning from Honolulu where she was nursing her wounds. Her long time boyfriend just wasn’t the man for her, and now she’ll be spending Christmas alone. Everything changes when she meets Grayson… and a world of danger. Suddenly she finds herself forced into hiding for the holidays with this charming, mysterious man.