I recently drove over to the coast for the weekend despite a forecast calling for rain. It’s raining here, and usually raining there, so we decided to give it a try. We got so lucky! The sun came out the second day, and we had great weather for spending several hours in the West Coast Game Park, about 7 miles south of Bandon on HWY 101. If you ever visit Bandon, Oregon, you must visit the Game Park! They usually have some kind of babies that you get to pet, and we played with a lion cub and a spotted leopard.

This isn’t zoomed in; my daughter took this at the rail where the handler brought the leopard by everyone for pets and pictures. 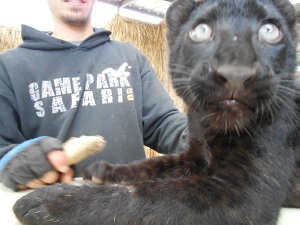 This is the evening sky in Bandon, Oregon. Bandon has the board walk, a variety of seafood restaurants, the Fudge Factory and Cranberry Sweets, which sells all kinds of jellied cranberry and other berry treats along with chocolate galore. 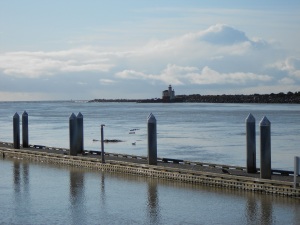 This is the lighthouse you can see from Bandon. There were also seals playing in the water as we watched.

We actually saw two different lighthouses on this trip. After visiting Bandon, we drove north to Winchester Bay and Salmon Harbor. From the viewpoint right off HWY 101, we could look down to the Umpqua Lighthouse and where the Umpqua River meets the Pacific Ocean. It’d been raining buckets for some time before our trip, so there was a huge brown cloud extending out into the ocean from the river. We live along the Umpqua River so it’s neat for the kids to see how and where it connects to the ocean.

One of the best parts of visiting the coast is always gazing out at the ocean and feeling how huge it is – even if you go every year. Or more often. It can be very temping to take off for the coast when you see it’s going to be sunny there that day.  Sometimes the best weather is a sunny day in the spring or fall when the winds aren’t as strong as they are in the summer.

And finally, the beach.This is where we go most often to play on the beach, although we love quite a few places all along the Oregon coast.There’s just something magical about going to the beach, playing in the waves and sand, and maybe finding treasure. .. or at least some cool shells. 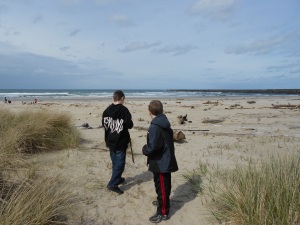 4 thoughts on “Sand and surprising sun on the Oregon Coast”