Embers of Hope, Flickers of Passion 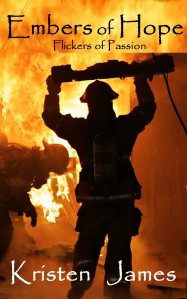 A story about balancing motherhood, friendship and romance…

Savanna dreaded telling her family and friends about her failed marriage so much that she hid it while living in another state. But she can’t stay away when her best friend Cassie loses her husband, who dies on duty as a firefighter. Savanna quickly returns home to help, longing to find herself again and make a home for her daughter. She meets Mike’s best friend, Jason, the man who talked him into staying with the department just before the fatal fire. He’s also the man who once saved Savanna’s life. Though hurting herself, something deep inside her won’t let her walk away. Jason needs her but she’s off limits on so many levels. She’s falling for this sexy firefighter but he confuses her to no end. Savanna’s a single mom with secrets, and she could lose her best friend over him.

Review from Melissa from There For You:
I am a woman. If you cut me, do I not bleed? If you offer me chocolate, do I not take it? If you offer me romance, do I not read it?! Of course I do, I am woman. Let me introduce you to my newest weakness. Romance novels by author Kristen James. I met Kristen via an interview I recently did on her (Interview) and decided to try her book. Boy is the woman, and reader, in me happy I did! Embers of Hope, Flickers of Passion is a well written love story, reminiscent of the movie Backdraft, in the fact that the main character, Jason, is a firefighter and his best friend, Mike, is killed in a fire.

The central characters of the story are Savanna, her best friend Cassie, Cassie’s husband Mike and Mike’s best friend Jason. The story starts off with Savanna moving herself, and her infant daughter Aubrey, or Bobby Boo as she is affectionately called, to Texas to help her best friend, Cassie, recover from the very recent death of her husband Mike. Mike is a firefighter who is killed in the line of duty. Mike’s best friend, Jason, is held accountable by himself and Cassie, even though he was not involved in the accident. Savanna quickly realizes that Jason is the firefighter who saved her life a few years before.

Being the mother hen that she is, Savanna soon decides that she not only needs to repair Cassie but also Jason, thus throwing herself in the middle of the two since Cassie blames him. The reader soon realizes that Savanna needs some saving herself as the last 2 or so years of her life with her ex-husband Eric have been horrible. After hearing parts of Savanna’s story, and an intense internal feeling of need, Jason also feels the need to help Savanna.

A beautifully woven plot, Embers of Hope, Flickers of Passion, will have you crying with Cassie, cheering for Jason, and praying Eric does not return to distinguish the flames that are spreading between Jason and Savanna. A romance novel that any woman with a history of being burned by love, and has hopes to rekindle the flame, can enjoy. Next up, More Than Memories, in the Kristen James romance novels.

I hope today you get your daily helping of romance and chocolate! Enjoy your day :)) -Melissa

A room without books is like a body without a soul. -Cicero